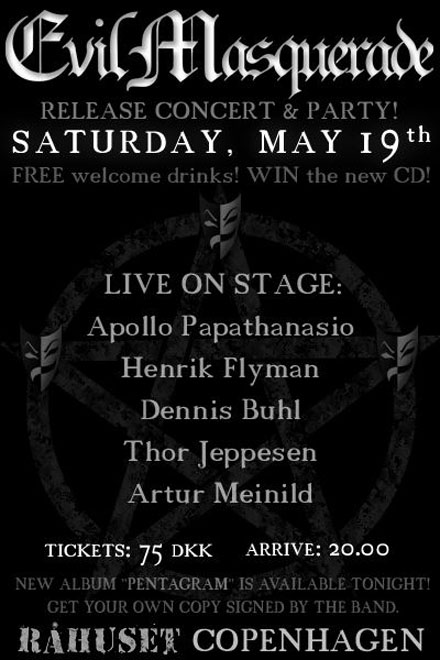 PENTAGRAM is Evil Masquerade’s fifth album so far and the brand new brilliant first single out from PENTAGRAM is the song “A Silhouette”. It is another masterpiece from the great mind of guitar wizard Henrik Flyman. The line-up has gone through some changes and new in the band is keyboardist Arthur Meinild; as well we have the old drummer Dennis Buhl that was part of the band a few years ago. The party was held at a place called Raahuset located 10 minutes walking distance from the central station in Copenhagen. When we arrived we were given free drinks in the shape of shots of Jagermeister and a local brewed beer and what can go wrong when a party treats you with free beverages that contains alcohol and there is great music? Our expectations were really high and was fulfilled but lets get back to that in a minute. The place where the party was held was a small club with a small stage in one room and a bar located straight across the room. The doors opened at 9 o clock and we were told that Evil Masquerade were set to perform around 10. On the right of the stage hung a big backdrop with the band name on it and to the left was a few stairs that led up to a few tables, chairs and a sofa where people either could sit and look at the band or stand up on the stairs during the show. More and more people arrived as the time went by and the band arrived to the club about 45 minutes before it was time to head on stage. The members were all really nice and everyone took the time talking to fans, sign autographs and talk to friends. The guys are no divas but just humble people who love their music and love to perform it. The atmosphere inside Raahuset was laid back and cool during the entire evening and I think that everyone there had a really great night filled with friends, great music and good drinks. At 10.30 the members walked through the audience and on to the stage and it was time for the band to kick off the party.

The fans gave the band a warm welcome and the band kicked off the evening with the song “Pentagram”. Papathanasio entered the stage when the intro was played and he thanked the fans for the very warm respond.

The stage was really small but somehow all the members managed to stand together on it at the same time and for that effort it’s worth giving them credit for. After the song had ended Jeppesen took the mic and said he thought they were going to play “Third Act” instead of “Pentagram” and Papathanasio said that it was now time for “Third Act” and everyone laughed. The audience stood mostly solid during the show and clapped their hands to the music. Since Papathanasio didn’t have a set-list on his spot he asked bandleader Flyman which song they were going to play after almost every song and now was it time to play “Hollow Soul”. The only one that moved around was Apollo Papathanasio and that could depend on the narrow space the stage had to stand on. But he on the other hand moved he around during the entire show and at one point was he also down in the crowd singing together with the former drummer while headbanging to the music the rest of the band played up on stage. There’s no doubt that all of the members are highly skilled at their instruments and it was a treat seeing Flyman live in action. Again, that man is a guitar-genius and one of the top 5 guitarists in the world. During “Unholy Water” Papathanasio had some problems with his mic and while the technician fixed the problem Flyman took over the show playing slide guitar with a beercan. The lighting was pretty poor and it was only Flyman, Papathanasio and Buhl that stood in light. The sound was a lot better despite the mishap with the mic. Papathanasio thanked everyone for being at Raahuset this night and once again asked Flyman what song that was coming up. “Fade To Black” came next and during the song a woman came towards the stage and took Papathanasio by the hand and took a picture while the song was played. In the middle of “I’ll Make You Burn” Papathanasio sang the lead phrases of the song “Heaven And Hell” by Black Sabbath as well as “Ain’t No Love In The Heart Of the City” by Whitesnake. Papathanasio gave it with this particular song and once again proved that he has an amazing voice that fits perfect to be singing the music of Evil Masquerade. I wish that all readers would look up the amazing Apollo Papathanasio and listen to what he has achieved in his career so far! Papathanasio sure is one of the hottest singers in the world at the moment.


Next song “Oh Harlequin” was taken from the bands debut album WELCOME TO THE SHOW that was released 2004. Then followed “On A Bed Of Thorns” after which Papathanasio said it was time to play a little older song in “But You Were Smiling”. Papathanasio now introduced the band members and then he once again jumped down from the stage and walked around amongst the audience and it really felt like both the fans as well as the band had a really great time during both the show and during the party afterwards. The brand new single “A Silhouette” brought down heavy applauds and it was a real crowd pleaser and the same went for the two last songs that followed which were “The Dark Minstrel Plays” and “Black Ravens Cry”. The mic issue had now come to an edge and Jeppesen took his mic and changed it with Papathanasio’s. Most people in the club sang a long with Papathanasio during “Black Ravens Cry” and it must be the bands biggest hit so far. As soon as the song ended took the band off their instruments and went off stage and that song ended about 80 minutes of excellent music. Parts of the audience screamed for encores but “Black Ravens Cry” was the last and final song for the night. It was in a relaxed and fun that Evil Masquerade stood on stage this Saturday evening and I bet that everyone in the club was really happy with the performance. Evil Masquerade put on a solid show and PENTAGRAM out to be the big success that band earn by know. This is a hard working band that deserves all the success they can get. A big thanks to the band and to Dark Minstrel music for throwing the release party, we really hope to see Evil Masquerade on a stage near us soon. On A Bed Of Thorns

But You Were Smiling

Thank you to Trine at Dark Minstrel Music for help with press/photo pass to the show.