On Friday June 8th and Saturday June 9th, the core members of Queensryche will debut their new band “Rising West” at the Hard Rock Café in Seattle WA. Rising West features Michael Wilton, Eddie Jackson, Scott Rockenfield, and Parker Lundgren of Queensryche, with powerhouse vocalist Todd La Torre of Crimson Glory. The band will be performing rare and classic hits from the first 5 Queensryche albums and plan on hitting the studio sometime early summer to begin recording their first release. 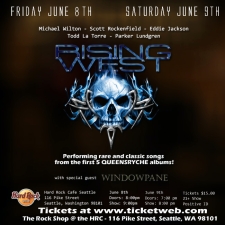 A seven-minute YouTube clip containing samples of Todd La Torre performing a number of QUEENSRŸCHE classics can be found below. Also available is Todd’s full-length performance of the song “Queen Of The Reich”.

Tate released his first solo CD in 2002 on Sanctuary Records. Self-titled, the LP was a huge departure from the work he had previously done with QUEENSRŸCHE.