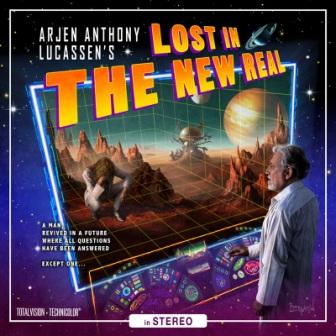 Multi-instrumentalist ARJEN LUCASSEN will be releasing his upcoming concept solo album, Lost In The New Real, May 8th in North America and April 23rd in Europe! Featuring artwork created by ARJEN and renowned designer Claudio Bergamin, plus an appearance by legendary screen actor Rutger Hauer as the album’s narrator, Lost In The New Real is a double-CD that tells the story of Mr. L, a 21st century man who was cryo-preserved at the moment of clinical death from a terminal disease. The album begins as Mr. L is being revived at a point in the distant future, when technology has advanced enough to cure his disease. Mr. L finds himself in a world that has drastically changed– to the point that the line between what’s real and what’s not is no longer clear.

To preview ARJEN’s Lost In The New Real, check out an official teaser trailer here, which features samples of the album.

The track-listing for this epic concept album is as follows:

Lost In The New Real (disc 2)
1. Our Imperfect Race
2. Welcome To The Machine (PINK FLOYD cover)
3. So Is There No God?
4. Veteran Of The Psychic Wars (BLUE OYSTER CULT cover)
5. The Social Recluse
6. Battle Of Evermore (LED ZEPPELIN cover)
7. The Space Hotel
8. Some Other Time (ALAN PARSONS PROJECT cover)
9. You Have Entered The Reality Zone
10. I’m The Slime (FRANK ZAPPA cover)

The tracks on disc 1 follow the main character Mr. L’s emotional journey as he is confronted with both serious and comical aspects of the “New Real”, and desperately tries to decide if he can find a meaningful place within it. Disc 2 is a mix of tracks that are part of the concept but didn’t fit on disc 1, plus cover songs related to the concept.

Press opportunities for ARJEN LUCASSEN are available, so please contact nikki.law@centurymedia.com to schedule!