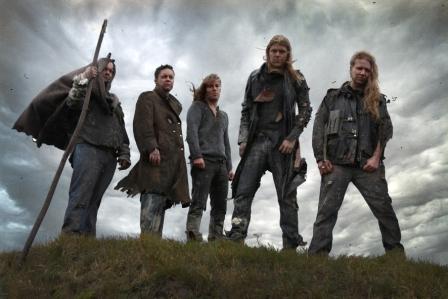 Finnish crusaders of epic heathen metal, MOONSORROW, and Century Media Records are proud to announce a worldwide deal! In regards to the signing, the band comments: “MOONSORROW are thrilled to start working with Century Media, a label that is home to many fellow artists already! We never make our music half way or with compromises and we know our art is in good hands with people who have the same mentality in running a record label. Now, after a year since the release of our last album we are ready to begin creating something new. The new chapter in this epic journey of MOONSORROW!”

Jens Prueter, Head Of A&R at Century Media Europe: “I followed MOONSORROW since their early days and I’m very proud to welcome them now to Century Media Records. They’ll be in good family along with their countrymen FINNTROLL, TURISAS and INSOMNIUM. Two of the band members already have some history with us: Henri Sorvali is also part of FINNTROLL (even if he rarely plays live with any band) and Marko Tarvonen once moved from drums to guitar in the overlooked Death Metal allstar band CHAOSBREED, who released an album that is as ‘brutal’ as its title.”

“Much has been said about the dark soul of Finnish Metal. A sound that is hard to copy for any non-domestic band. A sound out of endless woods, deepest sorrow and epic majesty. MOONSORROW are probably the most epic of all Finnish bands, not only because most of their songs are over 10 minutes long (sometimes even over 30 minutes), but mainly because they are able to tell stories that are older than written culture. You can follow them even if you don’t understand a single Finnish word. MOONSORROW are able to take you on journey through heathen times. I’m guessing I’m not the only one who can’t wait for the next chapter.”

MOONSORROW was founded in 1995 by the cousins Henri and Ville Sorvali with the goal of creating metal art with a good touch of national romanticism and a distinctively pagan approach. Between 1996 and 2001, MOONSORROW released 4 demos and an album before signing with Spinefarm Records. During this time, the line-up was completed with Marko ‘Baron’ Tarvonen, Mitja Harvilathi and Markus Eurèn– a winning team that hasn’t changed since then. The 2nd album, Voimasta Ja Kunniasta, was released in 2001, and its follow-up, Kivenkantaja (2003), hit the Finnish album charts at #16. It also took the band to their first shows abroad in 2004. Verisäkeet (2005) reached the charts as well, and MOONSORROW played their 1st show on the other side of the Atlantic, in addition to joining PRIMORDIAL for the band’s 1st full European tour, both in 2006. During that year, Janne Perttilä (also in BARREN EARTH) joined as live guitarist for the continuing extensive touring.

Their 5th album, Viides Luku – Hävitetty (2007) included just two songs, both of them checking in at around the 30-minute mark, paving the way to new heights of epic pagan art, which continued on the 68-minute long Tulimyrsky EP with another 30-minute song.

2011 saw the release of the most majestic album of the year, Varjoina Kuljemme Kuolleiden Maassa– a full-fledged concept album about a world after annihilation.