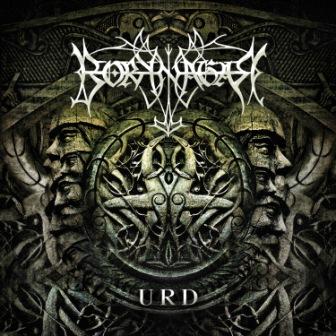 BORKNAGAR’s highly anticipated new album, Urd , is out now in Europe and North America! Having recently been voted “album of the month” in the current issues of Germany’s Metal Hammer Magazine as well as Norway’s Scream Magazine, the band would like to celebrate Urd’s release by presenting another new song off the album, “Frostrite”. To listen to “Frostrite”, featuring the returned ICS Vortex (ARCTURUS, ex-DIMMU BORGIR) on main vocals, please visit the band’s official Facebook profile and “like” to reveal this new track:
www.facebook.com/borknagarofficial

“Roots”, BORKNAGAR’s first single off their new album, can be heard here. The album’s artwork was designed by Brazilian artist Marcelo Vasco (www.P2RDESIGN.com), who has not only already worked on the band’s previous Universal release, but also with artists such as SOULFLY, BELPHEGOR, EINHERJER, and KEEP OF KALESSIN. Jens Bogren handled mixing duties for Urd at Sweden’s Fascination Street Studios (OPETH, PARADISE LOST, KATATONIA), and the track-listing for the album is below.

BORKNAGAR Urd track-listing:
1. Epochalypse
2. Roots
3. The Beauty Of Dead Cities
4. The Earthling
5. The Plains Of Memories
6. Mount Regency
7. Frostrite
8. The Winter Eclipse
9. In A Deeper World

Urd can be purchased at CM Distro in a few different formats, including as a bundle with the CD and an exclusive shirt, so reserve your copy now!