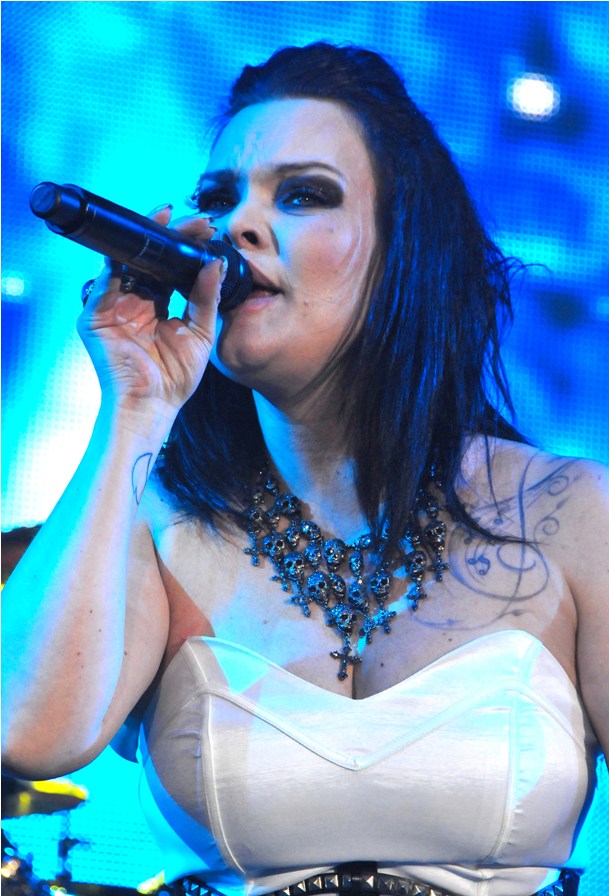 Symphonic metal quintet Nightwish, the most successful Finnish band abroad at the moment, played a show in front of over 7000 people in Helsinki’s Old Ice Hall. The show was a part of the bands six day Finland tour which was a great hit when all shows were completely sold out. It seems that Nightwish is now having the time of their career although their future was at stake following former vocalist Tarja Turunen’s departure in 2005. Swedish vocalist, Anette Olzon, was chosen to replace Tarja in 2007 the band’s latest two albums DARK PASSION PLAY and IMAGINAERUM have received both critical and commercial success across the globe.

The evening started with support band Poisonblack opening at 07:30 PM but I didn’t get to the venue until 5 minutes before 09:00 PM when Nightwish was about to start their show. The massive stage was covered with a blue/white curtain and after a couple of minutes wait the show opened up with new album intro track “Taikatalvi” which was sung by Marco Hietala (or was it played from the tape, not sure about it?) Anyway,  it did look kind of cool when Marco was singing the song while sitting in a rocking chair behind the curtain and audience saw only his character’s dark shadow during the performance. The actual show started with impressive pyro effects when the band first headed into “Storytime” followed by “Wish I Had Angel” and “Amaranth”. It was quite a shocking way to open the show with three hit songs in a row, right!!! The renewed set list was now strongly based on the latest IMAGINAERUM album which was released in November 2011. The album, which is made on the basis of the same name feature film based on the album tracks, was represented by as much as nine tracks. The new album is one of bands strongest in their career but perhaps too much is too much. Songs like the “jazz nightclub” track “Slow, Love, Slow” or over the top massive “Song of Myself” could have been replaced on the set list with some older gems instead! It was quite surprising how little attention the previous album DARK PASSION PLAY got tonight when only three tracks were performed from Olzon’s debut release with Nightwish. Just to name few brilliant songs like “Bye Bye Beautiful” and “7 Days to  the Wolves” were conspicuous by their absence now. What wasn’t so surprising anymore was that there wasn’t much left from the “Tarja era”. In a way it’s a good thing because Anette and Tarja are such different singers with quite a different vocal range, but on the other hand, there’s a large piece of the bands history missing from their show. The oldest track played tonight was “Dead to the World” from album CENTURY CHILD (2002). In addition to that there were just three songs played from ONCE (2004), which is bands biggest selling album to date, and a cover version of Gary Moore’s classic “Over the Hills and Far Away”. Special mention goes to really beautiful acoustic version of “Nemo” which was one of the highlights tonight. Anette Olzon, after being in the band for 5 years, has now finally gotten rid of Tarja’s shadow. Olzon is now doing what she does best, singing her heart out with her own style and strengths without any extra pressure. Her stage presence is quite funny to follow when it’s a mix of sweetness and genuine enthusiasm.  And the rest of the band, there might not be super virtuosos there, but the band’s skills are at an astonishing level.  There are no weak links there and the band is now a really strong unit together. Holopainen’s keyboard “monument” was quite impressive but if someone from the band would have to rise above the rest, then it would be Marco Hietala whose vocal skills and stage presence are in a class of its own.

As a whole, this was really an entertaining and impressive show. Despite some missing pieces on the set list, the song material was still strong enough to carry on through an almost two hour performance. Visually, Nightwish are nowadays on their own level in Finland.  Rarely, if ever, have we seen such massive lightning systems, huge stage setup, and great looking pyro’s in here. There’s no one who’s been even close to that, but Nightwish itself, when we are speaking about Finnish bands there.

It’s going to be interesting to see where Nightwish go from here. For sure this year, and perhaps the next, are going to be fulfilled with touring but what’s going to happen after that? It’s going to be impossible to exceed or even repeat the hyper massive production and sound of IMAGINAERIUM so perhaps it’s now time to go back to basics and release another “basic” metal album with some killer tunes? Only time will tell but so far everything looks good for Nightwish. 8. I Want My Tears Back (with Troy Donockley)

9. The Crow, the Owl and the Dove (with Troy Donockley)

10.The Islander (with Troy Donockley)

12.Last of the Wilds (with Troy Donockley)

15.Dead to the World

16.Over the Hills and Far Away (Gary Moore cover)(with Troy Donockley)