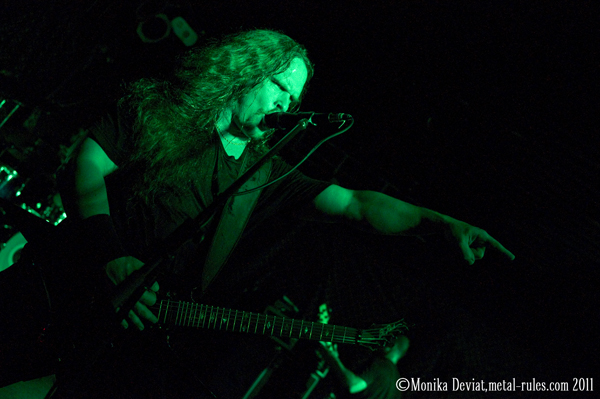 Live in Edmonton, Canada @ The Pawnshop Opening up the night were local melodic death metallers, Sonorous Odium. Edmonton fans came out early, giving the band a good sized crowd to play to. Sonorous Odium only had time to get in a few songs but they were able to demonstrate their skill and energetic live presence and the short set got the crowd moving right from the beginning. Abysmal Dawn from Los Angeles, Cali. were up next. The majority of their set consisted of songs off Leveling the Plane of Existence [Relapse Records, 2011] and Programmed to Consume [Relapse Records, 2008].  They played a solid set and kept a lively pit going throughout. When we last saw Vital Remains in Alberta, it was at Summer Slaughter 2010 and they were missing band members. This time they were short band members again but had a fill in vocalist, Brian Werner of Florida’s Infernaeon. Their “Christ killing death metal”, as Werner put it, really got the crowd moving. They invited fans up on stage and encouraged some stage diving. It was slow start but eventually a few people got up on stage to headbang with the band and then were encouraged to dive off the stage with a little push from Werner. The crowd really went nuts for “Icons of Evil” and “Dechristianize” where guitarist and founder Tony Lazaro brought out his custom 666 guitar. Hate Eternal was the first of the co-headliners in Edmonton. There were some minor technical difficulties during Hate Eternal’s set but the show went on unlike the night before in Calgary where the band was forced to end their set after a few songs. They played for approximately an hour and the set list consisted of a good portion of Phoenix Amongst the Ashes [Metal Blade, 2011]. Erik Rutan’s savage vocals and technically vicious riffs and leads, Jade Simonetto’s extreme drumming and J.J. Hrubovcak insane bass lines made for a spectacular performance. Although the band doesn’t move around too much, the technical brutality of the music kept the energy up in the pit. Origin is an incredible band to watch live. The band delivers technicality and speed flawlessly.  Former Skinless frontman Jason Keyser has made his debut as Origin’s vocalist on this tour. He did an impressive job, delivering the guttural vocals of Origin’s sound and interacting with the crowd, even jumping into the pit at one point. Midway through the set, a chicken fight mosh pit was incited. A couple girls and guys got up on someone else’s shoulders but it was a fairly short lived chicken fight mosh pit.  Origin delivered a formidable performance with the unrelenting drumming of John Longstreth, bass shredding of Mike Flores  and the extreme proficiency of founding member Paul Ryan’s guitar. Some crowd favorites of the night were “Wrath of Vishnu” and “Finite” and the new tunes off Entity [Relapse Records, 2011] were well received.