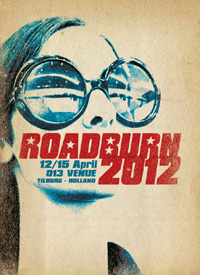 Article and pics by Arto Lehtinen

Once again it is April and time to return to the Roadburn festival in Tillburg, Holland. The line-up for  2011 looked absolutely awesome in every aspect.  A few of the bands who were forced to cancel their appearance last year had been re-booked (i.e. Candlemass and Evoken). Roadburn offered a nice deal of Finnish bands as well such as Hooded Menace. It was the sonic masters Sunn O))) who had been chosen to guide and be a curator of the Roadburn 2011. The members of Sunn O))) which have plenty of other bands picked up bands fitting to their taste and the concept of the Roadburn festival. Roadburn could be bigger and larger, but due to the cult status and the will of the organization of the fest, it will remain as intimate as it has been since the beginning. Metal-Rules.com got an excellent privilege of visiting the Roadburn festival for the second time in a row to see plenty of killer bands, smell the taste of weed with awesome people, and be a part of an awesome festival atmosphere.

The Swedish nameless members of the group called Ghost have achieved a lot during the short time. The debut album catapulted them to the success of another level. Increasing the interest to dig out some piece of information about the members involved in their ranks has caused an utter fuss and wondering who the guys are and what the heck it is all about. The Mini Theatre venue was totally packed when the Swedes got on the stage. The frontman with the pope clothes took over the stage leaving other guys on the background in the static roles.  All the songs from the debut album were  played at Roadburn. There was no communication between the audience and the band, seriously the conversation or communication with some kind of sense of humour would have ruined the Ghost concept for sure. If these guys manage to play the cards right, they will be huge. Winterfylleth was an entire unknown name to me even though they have got two albums out. Well three short haired guys with normal spandex did a grim sounding dark/black metallish approach. Honestly the band sounded a bit chaotic, but brutal and dark for sure. Blood Ceremony presented the occult oriented approach, fronted by a female singer. The stuff by Blood Ceremony could be described as psychedelic rock with the 70’s influences. The band magical capture of acid hard rock was truly spelling and a mind-blowing trip back in time when the entire 70’s culture used to rule the world. The vocalist’s beautiful voice crowned the trip. The legendary Pentagram! Above all the frontman Bobby Liebling has become an icon of the doom metal genre. However Pentagram or Liebling has put out a handful of albums because of the man’s interest in hassling with the intoxicated narcotics took him on a 40 year trip. The man survived and returned from hell and teamed up with the axemaster Victor Griffin and got LAST RITES album out. Bobby Liebling was definitely spell-bounded by the reaction and the feedback from the audience. The man’s legendary manners and stage presence were utter cult, and Pentagram’s show was truly entertaining. Eye-rolling and and flexing looked insane and on the other hand extremely amusing. Griffen beside Liebling was the dynamic and dominating duet on the stage. The set consisted both of the old and new material from the latest output. The reactivated Godflesh have been doing quite a few festival dates since returning at Hellfest 2010. The industrial based metal sonic torment definitely fitted perfectly to the roster of Roadburn. The band’s better known output is definitely STREETCLEARNER back in 1989, which got played entirely at the festival. Even though Godflesh has released plenty of albums, STREETCLEANER is considered a true classic of the industrial releases. The volume had been turned to the maximum level making the guts jump and heart crawl of the chest. There were no separate drums, just Justin Broadrick on the vocal and GC Green on the bass. All the drum parts had been programmed into a computer. The volume was on the insane loud level that someone literally fainted and was carried out of the venue to gasp for some air. Even though Godflesh didn’t show any mercy, somehow the whole gig turned out to be kind of monotonous. Fronted by the Goatwhore growler Soilent Green offered a brutal set of the hybrid mix of sludge and hard core and even grind core elements the Southern metallers raged. Other members rather withdrawn back focusing on the playing whereas the frontman L.Ben Falgoust II raw and brutal voice dissected the air. His relentless stage performance was intensive and insane. Once again the smaller venue was totally packed when the Swedish cult doomersters unleashed the ravens. The trio’s doom sounded tremendous catchy and melodic. All the classic from the Swedish doom ravens got played in front of the audience.