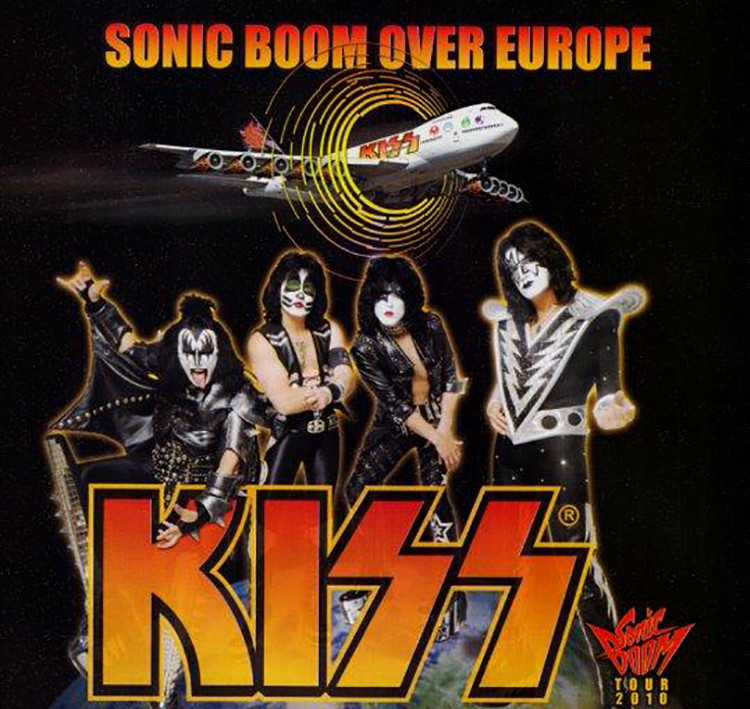 KISS treated thier most loyal fans and VIP/media –people with an extraordinary one-off club show in London Islington’s O2 Academy. This was a historical show in many ways, or should we say “Kisstorical,” because this was the most intimate gig band has performed in over 22 years. This show aimed to help promote the band’s upcoming SONIC BOOM OVER EUROPE –tour.

The place was packed, of course, and there were people from all around the world. There were fans from Brazil, Russia, Sweden, Germany, Denmark, and Finland, to mention a few represented nationalities. Unlike other KISS shows, there wasn’t any kind of merchandise available. That must have been because this show was confirmed only one week earlier.  This club’s total capacity is something like 700 altogether, but when you split that number in two, there are two separate floors, which means that there were less than 400 people on each floor.  The stage setup was otherwise fairly scaled-down, but there was still a colossal KISS logo behind Eric Singer’s drum kit. There was no support band at all, which was fine.  Instead of a support band, the DJ played many 70/80’s classics. It must be mentioned that for some strange reason, he decided to play AC/DC’s “Back in Black” from start to finish at least three times during the evening.

The show was originally slated to begin at 07:30 PM, but it was about 09:15 PM when the band finally took the stage by storm with “Modern Day Delilah.”  Right from the beginning, it was obvious that the band was clearly enjoying playing in such an intimate setting, but the crowd seemed to be a little confused at first. Maybe it was partly because of this strange situation, but it seemed that some people were still in shock, because the band started with a new album track instead of “Deuce” or “Detroit” Rock City”?  Things went soon back to normal when the band next headed into classic “Cold Gin.” The whole floorage started to boil when people jumped and literally went crazy during the song. If people had some “hotter than hell time” in the audience, it seemed that it was more than hot enough in the stage as well. Gene looked dead tired at times, but he could still make a good, solid performance. Another classic “Let Me Go Rock N Roll” was played next before Paul Stanley’s turn to have a longish speech about the band’s forthcoming tour and SONIC BOOM album. Another new track, “Say Yeah,” received such a good response, and the band played a great version of the song. The backing vocals by Eric were especially impressive. It was good to hear Gene’s signature song “Calling Dr.Love” next. That song has been out of the setlist in Europe since the 1999 PSYCHO CIRCUS -tour.

More familiar classics followed: “Got to Choose,” the epic “I Love It Loud,” and “100 000 Years”.  Then the band had a little break, and Paul again advertised the upcoming tour before hitting his all-time personal KISS favorite song, “Love Gun.” It has to be mentioned that although Paul’s voice isn’t the same as it once used to be. He sounded good there like he did on the whole evening.  Next, Eric’s turn to sing lead vocals on “Black Diamond” and then “Rock and Roll All Nite” closed the main set. Tons of confetti was used during the song, and for a brief moment, everybody for sure did forget that this was just a club show. Unfortunately, there was some drama in the air when the Co2 canisters used to blast confetti made breathing nearly impossible. Both, the band and fans upstairs and in front of the stage were having difficulty breathing from the concentration of Co2 in the air. Fortunately, nobody got hurt, and after a short break, the band returned to the stage and played a thunderous version of “Detroit Rock City.”

This was an excellent showcase for the upcoming tour. There was no surprises in the setlist, but the band was in perfect form both physically and musically. Besides the confetti used during “Rock and Roll All Night,” the band used no additional special effects. There was no blood splitting, no breathing of fire, no pyro’s or explosives, but this show was still great proof of how great a band KISS currently is. Although such effects are amazing, this evening did prove that it’s not always necessary to have all those elements to have a great show.