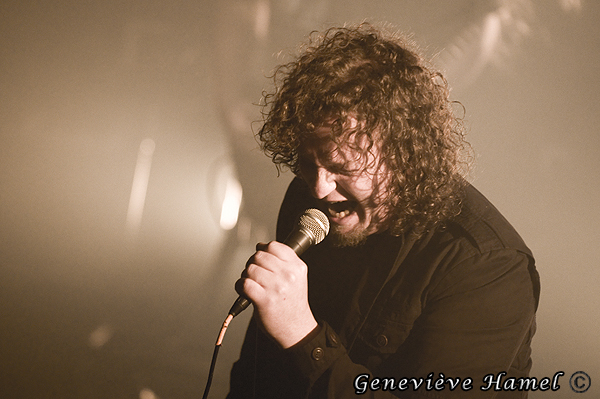 10 years! That’s what it took to Voïvod to play a headlining concert again in their adoptive hometown of Montreal! That’s quite long but it’s not that unusual in this case, the new momentum achieved by the return of long-departed singer “Snake” to the fold at the beginning of this decade was stopped by the premature death of founding member and riff-master “Piggy” in 2005. In fact, before this tragic event, the band was on it’s way to regain the popularity they  had in the 80’s. With Snake back, and former Metallica bassist Jason Newsted joining the band’s rank,  a new album was released in 2003 and a high profile tour with Ozzy Osbourne boosted the band’s popularity like never before. Voïvod was “in” and “hot” again. …And then Piggy died of colon cancer, laying the band to rest… for a few years. Fast forward to 2008 when the band made it’s return to the live scene at the Heavy MTL festival (with new guitarist Dan Mongrain), a magical event for those lucky enough to witness it! 2 more albums later, both of them featuring the guitar parts recorded by Piggy before he left this world behind, and back in full touring more with  Mongrain (Martyr), it was time for Voïvod to play a real headlining concert in the city who was influential in their  shaping , namely Montreal. December 12, 2009 Club Soda. A few hundred fans are in the venue, waiting for the band to take the stage. As usual, the band started the show with it’s self-titled classic, “Voïvod”, and Snake was wearing his creepy gasmask! It’s not hard to see that the band is in top shape, original bassist Blacky running everywhere it’ s possible on the venue stage, Mongrain playing the parts to perfection, and drummer Away pounding the skins like there’s no tomorrow! And what about Snake, incredible as usual! The man is truly a great frontman, always interacting with the crowd and cracking jokes, his singing as phenomenal as it was 15 years ago!  Beside a couple of songs form their last album, INFINI, all the classics where played, most notably “Tribal Convictions” and “Ravenous Medicine”.  The early thrasher “Ripping Headaches” was also a part of the set, a surprise as it was rarely played by this line-up of the band. All in all, an awesome show but really, has this band ever played a bad show? I don’t think so.  Again, that night, Voïvod delivered the goods.