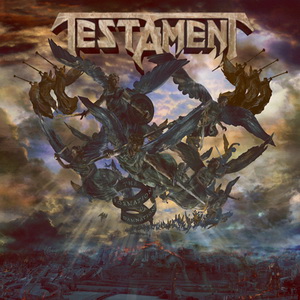 1. Testament ~ THE FORMATION OF DAMNATION Expectations were high after waiting nearly ten years for Testament to finally get around to putting out the follow-up to 1999’s THE GATHERING. The Bay Area thrash veterans certainly didn’t disappoint either, as THE FORMATION OF DAMNATION combines old-school thrash, ripping guitar solos and Chuck Billy’s booming roar with a fresh and modern sound that stands up to the legacy (pardon the pun) and influence that this band has had on heavy metal. Opeth’s track record of groundbreaking and dynamic releases continues with WATERSHED. Mikael Åkerfeldt continues to steer his baby in a progressive rock-driven direction but the band’s long-standing death metal roots are interwoven to create another majestic and unforgettable entry in Opeth’s flawless catalogue.

11. Iced Earth ~ THE CRUCIBLE OF MAN – SOMETHING WICKED PART 2 On Amaseffer’s debut, EXODUS-SLAVES FOR LIFE, the Israeli prog-metal band takes the listener on a musical journey that is chock full of twists and turns that drive the epic concept of the portrayal of Israelites in the Old Testament. With a phenomenal vocal performance by Mats Leven, this, the first entry in a planned trilogy of albums to fulfill the concept, finds the mixture of progressive metal, hard rock, Middle Eastern sounds and world music to challenge Orphaned Land’s throne. Amaseffer is a rare thing these days: unique and refreshing band without a shred of trend-hopping. The three-hour documentary that makes up the first disc of this three DVD box set is worth the price itself. Absolutely essential for any metal fan, whether seasoned veteran or death metal newbie.

After letting this monstrous production settle in for six months, my opinion has not changed. Not a bad album but certainly a bold artistic venture by the band that divided fans and defied expectations. Just didn’t do it for me at all.

THE UNSPOKEN KING is sure to be on many writers’ lists of 2008’s biggest misfires. Unfortunately, this was dead in the water even before it was released as fans’ outrage over the band’s new look and use of keyboards and clean vocals sent the online community ablaze. Losing Lord Worm (for the second time) was a big, big blow to Cryptopsy but let’s hope the band takes some of its fans’ utter disdain for this release to heart on its next release.

Lacking the dark melodies that saw LUST STAINED DESPAIR listed among my Top 20 releases of 2006, A DEAD HEAVY DAY was a disappointing follow-up that didn’t have the same repeated listening appeal.

2004’s THE HUMAN EQUATION was a brilliant entry in Arjen Anthony Lucassen’s progressive metal entity but the “who’s who of metal” laundry list of musicians and singers couldn’t rescue this overly long dud from being a tepid entry in Ayreon’s otherwise dependable catalogue.

The old dogs blew everyone away over the past 18 months delivering songs that had been all but forgotten by the Ozzy-led Black Sabbath over the past decade. Now, they have to prove that they can hold it together in the studio to create new material that can stand alongside MOB RULES and HEAVEN AND HELL.

Paul Stanley has been quoted as saying the band is planning to return to the studio to record a “classic” KISS album. Opinions are mixed but my curiosity—and outrageous KISS fanboy status—can’t stop me from being giddy as a schoolgirl.

I went in carefully, unsure of what Ace Frehley circa 2008 would do on stage but, man, he smoked! The long-awaited follow-up to 1989’s TROUBLE WALKIN’ will be high on my list of “must have” albums in 2009.

CHRIST ILLUSION was a strong and surprising album that proved the godfathers of thrash still had some life left in them. The new song “Psychopathy Red” seems promising, so let’s hope the rest of the record follows suit.

Original vocalist Mike Munro is back in the fold again, so my money is on a rejuvenated Meliah Rage to release an album more in tune with their roots than the tepid alt-metal that plagued THE DEEP AND DREAMLESS SLEEP.