I’m sure Dark Funeral needs no introduction. The Swedish black metallers finally came to the UK two years after their last album ATTERA TOTUS SANCTUS was released to general acclaim. I interviewed founding member, guitarist and inspiration Lord Ahriman, who was pretty stressed out when I met him for the interview, due to an early start in the day and some problems with merchandise. He was pretty reserved, distant and although answered my questions with great politeness and courtesy, it always felt as if he didn’t want to be there.

Who are your musical influences and when exactly did you find your Dark Funeral sound?< ?xml:namespace prefix = o ns = "urn:schemas-microsoft-com:office:office" />

Well, I donâ€™t really have any musical influences except for myself and my own inner demons. I had a vision of what kind of band I wanted to do and Iâ€™m still trying to achieve that. Itâ€™s a progressing through trial, finding new tricks and turns. We have a strong foundation and you can easily recognise Dark Funeral where you hear it but weâ€™re still trying to evolve.

How do you think your sound has progressed throughout your history?

Personally I think you got faster and fasterâ€¦

Yeah thatâ€™s true but that was one of the things that I said already in 1994. I said with Dark Funeral I donâ€™t want to be like other bands. They release 3 albums and then they go slower. We want to get faster and faster with each album. Butâ€¦.I must admit, my plan with the last record was really to do a slower record, but when we eventually stopped working on the songs we were like â€œNaa lets go faster!â€

I donâ€™t think it was a lot faster, it felt slower because there was more going onâ€¦

Yeah, but it is a lot faster. But I guess it all depends on the production. Bigger production and not that dark like the other records, but it is for sure a lot faster than anything weâ€™ve done before.

So, was your last album the most popular and successful?

I donâ€™t know. It seems like we have been growing every year. I mean, I donâ€™t know by record sales but I can see from all the touring that we are doing that weâ€™re getting bigger and better crowds every time we go out.

Why do you think this is so?

I donâ€™t know, but I think that one thing people realise is that weâ€™re a really hard working band and I think the fans appreciate a band that gives 110% all the time.

So why did Caligula change his vocal style in the last album, its not classic black metalâ€¦

No, but as a musician and as a vocalist you also want to change a little bit. I think that the vocals suited the songs and production better than if he was doing an old direction. Itâ€™s just a natural progression, try a little bit different twist on the vocals.

So what do you want people to get from your music?

To feel the living hell weâ€™re living in. Feel whatâ€™s going on inside our minds.

Is that what you get as well?

When I listen to music, when I write music and when I go on stage I feel kind of relieved. So many feelings that I put into the music, itâ€™s a sort of therapy I guess. Itâ€™s a kind of a calming thing. You write to be able to live everyday.

Who writes most of the songs? What is the songwriting process like?

No, I always look for input from the other guys but usually its stuff I write 95%-98% of the stuff.

Both lyrics and the melody?

No the lyrics are all up to Caligula. I concentrate on the music and he does the lyrics so we get our own territories to take care of.

Dominator left Aeon to join you guys, to devote himself full time to Dark Funeral. What did you say to him to convince him?

Well, I mean I canâ€™t really say anything. We needed a drummer and we just asked him if he was interested and he just said yes. He could have said no but he said yes and I havenâ€™t thought more about it than that. Of course, itâ€™s hard for them that they donâ€™t have a drummer now but I mean it was Dominatorâ€™s choice and I am glad he made that choice. He is an amazing drummer and I am glad he wanted to join.

Oh, Iâ€™ve heard about him.

Ahh, I was going to ask whether you guys made up or something, but obviously notâ€¦

He fucked us real bad, end of story basically. I donâ€™t look to the past, I look forward and heâ€™s an old chapter. Iâ€™m not pissed off at him like that. Itâ€™s not like I walk round everyday â€œShit, motherfuckerâ€ you know, heâ€™s just an old chapter, he doesnâ€™t exist anymore.

Do you ever have any tension or any creative differences?

Of course, but we still have a core that binds us together.

Okay, Iâ€™m going to ask you something thatâ€™s probably been asked a lot of times before. Your personal philosophy?

I usually donâ€™t talk about thatâ€¦

No, Iâ€™m bored to talk about it and I feel itâ€™s more private to me these days.

But it comes out through your music?

I think the official side of my philosophy is what I show through the band and show through my music. I just want to have something private these days.

Is it possible to enjoy Dark Funeral without subscribing to the philosophy or the lyrics that you write?

I think there is. Iâ€™ve talked to lots of people we meet when on tour and also people that donâ€™t even like metal, and for some strange reason they find Dark Funeral very good and theyâ€™re all into the music and not the lyrical side of the band. Iâ€™m cool with that, I donâ€™t really care what other people think or not think and how they get into the band or not. Iâ€™m glad the people who get into the band and enjoy it and get something out of it, Iâ€™m really cool with that. I donâ€™t dig into why too much, you know. Iâ€™m living my life in a closet, my own closet.

With the recent documentaries about Black Metal, itâ€™s almost become a bit glamorised and a bit popularized. What do you think? Is it diluting Black Metalâ€™s message as it originally was?

Well, Iâ€™m not really a fan of everything. Nowadays we get lots of requests to do documentaries and different videos, I just say no because I donâ€™t like it. Iâ€™m not a movie star, if you know what I mean. Sometimes we have to make sacrifices I guess, like now. Itâ€™s more and more seldom that I do interviews becauseâ€¦I donâ€™t know why, in a way our fans want to know whatâ€™s going on with the band and someone has to give them the news and information. I guess even if I donâ€™t want to I have to respect our fans a little bit and do it, but I really like to stay behind the curtain and do my thing.  I guess itâ€™s just part of the business.

Especially when you achieve some level of successâ€¦.

Yeah, thatâ€™s what makes it harder, thatâ€™s why Iâ€™m more and more seldom doing interviews. I get too much pressure from the media and then I just donâ€™t want to do it.

Well, we didnâ€™t have any good offers. I mean, to do a proper tour anywhere costs lots of money. If we canâ€™t get any show fees or too low show fees then we canâ€™t afford to do it. I mean, weâ€™re not making much money at all but itâ€™s still got to be some money involved so we can get here to do it. Up till now we had such bad offers, we have wanted to come over but we havenâ€™t been able to afford to until now.

Where did you feel that you were really welcomed? Where the fans made it one of the best gigs you ever did.

Well South America is really special to us. I mean, we are touring so much and these are the shows that really stick to your mind.

You were one of the first Extreme Metal bands to go to South East Asia and the Far East, Singapore etc. Would you go back?

How popular is Dark Funeral in Sweden?

I donâ€™t know. It looks like weâ€™re kind of popular. The last album was number 3 on the heavy metal chart so it seems like we have a really really big fan base in Sweden. We never play there butâ€¦..we seem to have a lot of fans.

Last question, Iâ€™ll let you go now. Is there a new album, is there any material or are you still writing?

We have a little bit, the plan had been for a long time that after this tour, after the UK shows, that we have a long vacation because we have been touring a lot. Weâ€™re going to try to focus on the new album next year. We may do a couple of shows once in a while, but weâ€™re going to mainly focus on writing and recording a new record.

Do you have a deadline or anything?

No, we havenâ€™t come to that point; you know we donâ€™t really have a record deal for the next record.

Arenâ€™t you on Regain?

Yeah, but we have to do one album at a time. They are coming down to Stockholm this weekend but we are here (UK). They wanted to meet with us and discussâ€¦.I mean, thereâ€™s interests from lots of labels, Iâ€™m not worried about getting a record deal, but we havenâ€™t signed anything for a new record yet. Thatâ€™s one thing weâ€™re going to take care of after New Years. Then write and record the next album sometime next year.

All right, thatâ€™s it, I appreciate you taking the time.

Thanks to Asif at Soundshock.net for setting up the interview! Owe you one buddy! 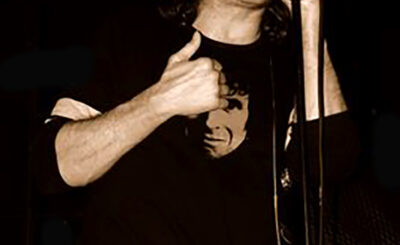