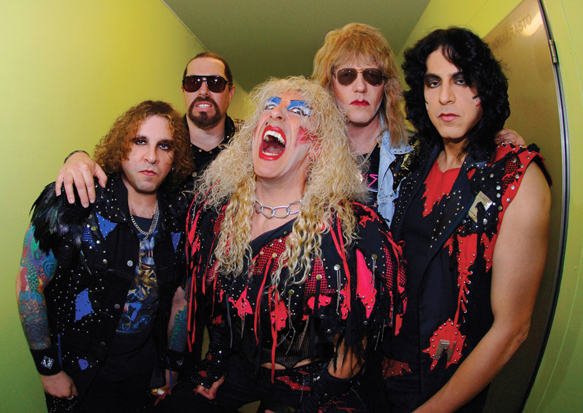 Legendary glam/hard rock band Twisted Sister was originally formed in 1972 by guitarist Jay Jay French. In the beginning, the band went through numerous lineup changes. Eddie Ojeda joined their ranks in 1975, and one year later, the group found its true leader Dee Snider who soon became the band’s dominant songwriter. Former Dictators bassist Mark (the Animal) Mendoza joined in 1978, and the band changed its style from glam rock to a more metallic hard rock. The band released their first single, ‘I’ll Never Grow Up Now!’ via their own label TRS in 1981, but it wasn’t until 1982 that they finally got their first deal from an independent record company, Secret Records. At this point drummer, A.J Pero completed the classic line-up. Later in the same year, the band finally, after ten years, released their first studio album UNDER THE BLADE. The album became a surprise underground success, and major company Atlantic Records soon signed the band. YOU CAN’T STOP ROCK ‘N ROLL came out in 1983. The band got its first chart-flirting single with that album, but it wasn’t until 1984 and STAY HUNGRY that the band hit the BIG time! With the help of such monster hits as “We’re Not Gonna Take It” and “I Wanna Rock,” the album soon exceeded multi-platinum sales. Twisted Sister was at the top of their game. Unfortunately, the good times didnï¿½t last too long. The band’s 1985 release COME OUT AND PLAY quickly slid off the charts, and the band started to lose their media interest. A.J Pero left after the tour, and veteran drummer Joe Franco replaced him. The band made its final attempt to return with another album, LOVE IS FOR SUCKERS, in 1987, but after very disappointing sales, Twisted Sister wound up disintegrating shortly after that.

The classic line-up of Twisted Sister: Dee Snider, Jay Jay French, Eddie Ojeda, Mark (the Animal) Mendoza, and A.J Pero reformed in 2003 after sixteen-year nonexistence. Since then, the band has toured sporadically across the globe. Though the band has not released any new original songs, they have released any material, including the heavy metal Christmas album TWISTED CHRISTMAS, which came out in 2006. I had a chance to talk briefly with Jay, Jay, and Mark before the band’s show in Helsinki on the 12th of November, and here are the results of that conversation.

THE STATE OF TWISTED SISTER?

Last year it was widely announced that Twisted Sister would quit its successful career, and the last release ever from the band would be the album “Twisted Christmas,” but sometimes things do change: Well, about quitting the band, that was something that we never said. It was the press who said that. When someone did ask our plans last year, we said we hadn’t got anything planned, and that’s how that rumor started. We never said that we are completely done.

The band is not over, but they haven’t been on the road too much lately. Before tonight’s show in Finland band has played only two shows this whole year:

“People should understand that we are not a full-time band anymore. We all have other things in life. We do Twisted Sister when we have time and when it fits everyone’s schedule.”

Next year will be the bands 35th Anniversary year, and the band didn’t rule about the possibility that Twisted Sister might continue doing more shows in the future?:

“Well, now we have two shows in Sweden, one in Gothenburg and one in Stockholm, and then we have three shows in the U.S, and that’s all we are going to do right now. We don’t know about next year? We might do some shows, but where and when, we don’t know?”

Since the reunion started in 2003 band has played over 90 shows around the world, but they have done a lot of other stuff.

“During the past four years, we have released a lot’s of stuff. We have put out three DVD’s and we have released a bunch of CD’s: “Twisted Christmas” came out last autumn, “Still Hungry” came out in 2005 and then there are “Best of” -albums and more, that’s quite a lot from the band which is not a full-time band anymore, right?”

“The Video Years” came out great. It’s a great cross-section of Twisted Sister’s history. It includes all the MTV hits, classic videos, lots of live clips, and the best part of it is, in my opinion, the interviews section where we talk about the details of each video and what was going on behind the scenes and other stuff like that.”

The band was headlining the Rocklahoma festival in the U.S last July. What made the event very special were the performers, it was all about 80ï¿½s metal and hard rock only:

Against all expectations, the festival was a huge success:

“People didn’t believe that a festival with such a lineup would work, and they think that the guy who was organizing it was totally crazy. People were sure that the whole thing would be a financial disaster, but what happened, there were over 110 000 tickets sold in three days. It was a huge, huge success, and there will be another Rocklahoma next summer.”

The band was really happy to see that 80’s bands finally got their very own festival in the U.S:

“We have been doing this reunion thing for about four years now, and we have mostly done headlining shows everywhere. We have headlined Wacken Open Air, Bang Your Head, Gods of Metal, and Swedenrock -festivals in Europe. We have played in front of  80 000 people in Canada and so on, but we haven’t done things like that in the U.S because there haven’t been such festivals like Rocklahoma. I’m really glad that it went so well.”

“Twisted Christmas” was released last fall, and surprisingly it turned out to be very successful, especially in the U.S. Where did the band get the whole idea of making a Heavy Metal Christmas album?:

“Well, in the beginning, it was a kind of joke, and we were not sure if it would destroy what was last left off our credibility but fortunately, it turned out to a great thing. You know, how many heavy metal bands have released a Christmas album? The idea came about because my singer hasn’t written a new song in over a decade. I was really trying to get him excited about anything, and I thought, “How about doing a Christmas album? “I think that no one has done an album like that before, so why should we not do that? On the other hand, people like to give presents to each other around Christmas time, giving a gift. So when you make music like that around the Christmas holidays, you will probably sell a lot of products because people like to give gifts and so on, and it did work. That album has sold a lot. New DVD “Twisted Christmas” is also becoming a hit; it’s selling very well.”

The Christmas album was a huge hit, especially in the States:

“No, we are not doing too much of the Christmas record in Europe. We are just doing some of it. We have done only “Oh Come All Ye Faithful” and “I Saw My Mommy Kissing Santa Clause,” not too much. We play more songs from that album in the U.S because the album did sell a lot in there.”

“It went out great. They’re really great guys, all of them. I did a song, “It Snows in Hell,” a song I did on their album. Usually, they don’t do that song live, but now we did it together. It was a lot of fun!”

Twisted Sister is best known for their heavy metal classics like: “I Wanna Rock” and “We’re Not Gonna Take It,” but which songs are their own favorite anthems of all time?

“Well, there are so many great songs and bands there, it’s almost impossible to name just a few, but let’s try. I do really like old Alice Cooper stuff. I think that “School’s Out” and I’m Eighteen” are some of the best songs ever done. “Cum On Feel The Noize” by Slade is a great anthem, isn’t it? Slade has done a lot of great stuff. Queen has many great anthems; Judas Priest’s You’ve Got Another Thing Coming” is a great great song. They have lots of great songs, and then there’s AC/DC. The song “For Those About to Rock” is one of the greatest songs ever. Actually, everything that AC/DChase done is brilliant, and they have done more than 20 albums? They’re definitely one of the best bands ever!”

The band also want you to know where to find all the latest Twisted Sister news and info:

“The best way to find out what’s going on in the world of Twisted Sister is to go www.twistedsister.com; there you’ll find all the details what’s going on? It’s a page made by the band itself, not an outsider or any record company.”

SPECIAL THANX FOR EASTWAY AND JOHANNA KIISKI FROM WARNER MUSIC FINLAND TO GET THIS INTERVIEW DONE !!!

Come Out and Play
S.M.F.