And welcome to ?This Godless Endeavor: Staying Metal In The War Zone?! I am a 27-year-old Paratrooper in the U.S. Army currently deployed to Iraq. I?m also a husband, father, musician, and in instances such as this, a writer. Most importantly for this column, I am a raging Metalhead just the same as you! And although few in numbers, I am not alone in my love for Metal as there are others with the same passion for the most powerful of music genres. It is my aim to help open the window into our world here, even if just a little bit, by offering my insight – as well as from other troops ? on how we continue to ?Stay Metal?, even while bearing the stresses of a combat deployment. I am honored and humbled to be able to tell a part of our story here.

The first thing I?d like to tell you is a little of my own story. I?ve had a love for music since I was very young, and started to like heavy metal well before I was a teenager. Around that time, after already hearing all of the glory days of Metallica, Megadeth, and other huge U.S. bands of the time, I decided I just had to go global and hear Iron Maiden. They had such awesome album covers, I knew they just HAD to be amazing. Fortunately, the logic of a 13-year-old worked out well. I got a cassette of LIVE AFTER DEATH, and was blown away by the sheer energy and the power of their music! They instantly became my favorite band then and have been since. I had gotten serious about playing guitar, and spent most of my high school years in a performing arts school getting some excellent training. Metal at that point would take a back seat to Jazz, Fusion, Funk, Classical, and so forth. I wouldn?t be until I was 19 and heard Blind Guardian?s NIGHTFALL IN MIDDLE EARTH that my love for Metal would emerge and save me from being a music snob. I still have an appreciation and liking for all kinds of music, but there?s no denying a bone-crushing riff, face-melting dual-guitar harmonies, and other awesomely-hyphenated qualities that put heavy freakin? metal at the top of my list.

19 years old was also the age I joined the Army. Why did I join, you ask? My dad had made a great career out of the Army Band, and with my guitar skills, I figured I could too. My attempts at working full time, either retail or waiting tables, were just not happening for me.  I still had some growing up to do, and I was very much open to what the military had to offer, both in that respect and beyond. So I joined as a Guitar Player (yes, that?s a job in the military!) There I got some awesome experience playing professionally, both in my day job and at night at bars and clubs. I grew exponentially as a musician, but came to a personal conclusion ? the military and music were just a bad mix for me. I decided I wasn?t ready to leave the Army, but that I would change jobs and learn a new skill. So I went and learned to fix medical equipment, went to jump school (jumping out of planes, that is), and found myself in a totally new environment from the band, amongst Infantrymen and Artillerymen, Spec Ops, etc. I also fell in love and married my wife, had two sons, and of course found myself thousands of miles away from them in Iraq ? all in the last few years.

Half-a-year later brings us here and now. I?m over here, doing my day-to-day routine (and sometimes things that are far from routine), trying to stay sane while missing the hell out of my family. I?m hoping you?re over there having a beer for me ? I can?t! There?s a lot of things I can?t do that most of you can. Such is the life of a serviceman. And to all other troops reading this, whether you?re combat arms or combat support, I salute you and the sacrifices you make. This is for you as much as it is for me and everyone else. In the future I?d like to be hearing from all of you to help make this column as interesting and informative as it can be. I also welcome any and all questions from everyone, and will answer them to the best of my ability.

Well, that?s all for now. I look forward to talking with you all again real soon. Until then, continue to stay Metal!

If you have any questions for Alex, he will try to answer them in his weekly column here in Metal-Rules.com. Send an e-mail here.

Please Note: Any opinions expressed in this article are those of the author and may not reflect that of the US Army, Metal-Rules.com, or anyone else. 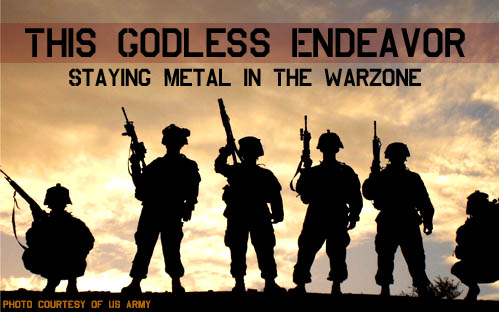 This Godless Endeavor: Staying Metal In The Warzone (#5)

This Godless Endeavor: Staying Metal In The Warzone (#4)

This Godless Endeavor: Staying Metal In The War Zone (#3)

This Godless Endeavor: Staying Metal In The War Zone (#2)