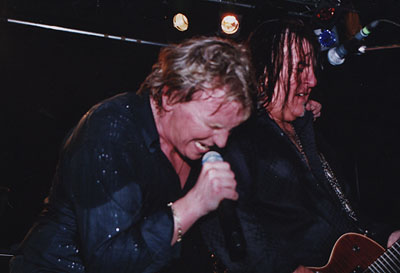 The Danish legendary act Pretty Maids have not done a lot lately, their latest tour took place in 2002. Their latest album WAKE UP TO THE REAL WORLD came in late 2006 and it was that album the band was supporting with this early Christmas show at Amager Bio in < ?xml:namespace prefix = st1 ns = "urn:schemas-microsoft-com:office:smarttags" />. This was their second show, the day before they had played in so this is not a proper tour. I talked to guitarist Ken Hammer before the show and he said that the band was about to get out on a real tour in March/April 2007 and that he was really happy with the outcome of the new album.

The show kicked off with “Back To Back” which was followed by the christmas song “In Santa’s Claws”. Lead singer Atkins is a perfect frontman and the audience did everything he told them to. Jackson and Hammer are a great team, but should have worked a little harder towards the audience though, and Tshicaja is a rock behind the drums.

I thought this show was going to be a greatest hits show because of the enormous back catalogue the band has but no. 6 songs out of the show’s 17 were taken from the new album. But even though I think the new songs are perfect it can seem a bit strange that they played so many as the cd had only been out in denmark for a few days A few of the amazing classic songs Pretty Maids did do were “Savage Heart”, “Love Games” and “Red Hot And Heavy”. There wasn’t any material from the later albums like CARPE DIEM. From ANYTHING WORTH DOING IS WORTH OVERDOING (1999) they did the songs “Destination Paradise” and “Hell On High Hells” and from PLANET PANIC (2002) only one song, “Virtual Brutality”. The set list sure left more to wish for unfortunately.

The night ended with “Red Hot And Heavy” but the band was called back to do the encores which were “Future World” followed by “Please Don’t Leave Me”. To close the show they a fitting Christmas tune “A Merry Jingle”.

Pretty Maids is still a strong and solid live act but the strange choice of songs didn’t benefit the show at all. I had hoped that they would play some more older song and would put on a more energetic show. The Danes played a good show but nothing more which is sad because I know that the guys can do better than this. Pretty Maids are booked for Sweden Rock Festival this summer and I hope that they can give a stronger performance there.

Wake Up To The Real World

I Am The End

Another Shot Of Your Love

The Black Dahlia Murder / Job For A Cowboy / The Red Chord / Gorerotted at The Mean Fiddler, London