The last show of a tour is typically a wild and woolly affair and after spending almost six well-documented (thanks to Gene Hoglan’s hilarious tour diary entries) weeks travelling the hard roads of the U.S. and Canada together, Fear Factory, Strapping Young Lad, Soilwork and Darkane wound up the party here in Vancouver in fine fashion.  It would come as a surprise to many fans the following week when it was announced that this would be the last show that Soilwork’s Peter Wichers would play with the band as the guitarist cited road fatigue and financial reasons for his departure and would instead focus on producing other bands.  One would never have known that such a sombre mood was cast over Soilwork as all of the bands delivered excellent, albeit rote, sets peppered with various shenanigans and hijinks.

Having played on North American soil only twice previous to this tour, Sweden’s Darkane was introduced to audiences and as far as Vancouver went, the response seemed very positive.  The ungodly start time of 7:00PM would have sunk many bands but Darkane took the ball and ran with it delivering a 30-minute set that touched on each of their four releases.  This year’s LAYERS OF LIES is a much more stripped-down album than was 2002’s over-produced EXPANDING SENSES and the four tracks played from it transposed well to the live setting.  Christofer Malmstrom did some serious damage on guitar with “Innocence Gone” and “Convicted” being noteworthy examples of his skilful soloing.  Besides being the major songwriter for the band, drummer Peter Wildoer is an absolute machine behind the kit.  His skills on “Chaos vs. Order” and “Emanation of Fear” could easily be placed alongside those of major-leaguers like Flo Mournier and touring mate Gene Hoglan.  The biggest surprise for me, though, was Andreas Sydow’s vocal range on “Organic Canvas.”  His growling is without question but being able to execute cleans flawlessly live is quite a feat and Sydow did just that.  Unfortunately, Darkane was plagued with some very hollow sound but that did not diminish from the fact that they are an incredibly tight live band.  Maybe it was because I had not seen the band live before and pretty much knew what to expect of the other three but Darkane really impressed me in an unassuming way.  Quality, European death/thrash without all the clichés.  Comparisons are a dime-a-dozen these days, yet Darkane manages to separate themselves from the pack very, very well.

Thinking back, I never noticed any cues from Peter Wichers or the rest of the Soilwork band members that would signal this being the guitarist’s final show but then I wasn’t looking for them, either.  Everything seemed to be business as usual with the now-expected set (their lead-in music of the theme song from The Muppets’ Swedish Chef was a humorous touch), “Speed” Strid wavered perfectly between his gruff death metal growls and soaring clean vocals, Dirk Verbeuren unleashed a torrent of double bass and blastbeats, Ola Flink looked like an out-of-control hippie on bass and the rest of the band was just…there.  In other words, this was your typical Soilwork show.  I love Soilwork and, unlike many long-time fans, have had no issue with their transition towards the more melodic side of metal beginning with 2002’s NATURAL BORN CHAOS but as far as a live act goes, they really don’t dazzle.  Strid drops f-bombs WAAAAAY too much and Ola Frenning looks like a cross between Popeye and one of those dried apple head dolls, so for anyone who hasn’t seen Soilwork before, this isn’t exactly a glowing introduction, but in reality, it’s the music that matters and the band certainly does that well.  Sadly, nothing was played from STEELBATH SUICIDE or CHAINHEART MACHINE but I think it is safe to say that until Soilwork is headlining and playing 90-minute sets, those songs will remain in the vaults.  At 35 minutes, Soilwork’s set was just far too short and heavy with tracks taken from the last two releases.  Since Devin Townsend was there, I was hoping he might come out for a duet on “As We Speak,” but it was not to be.  Strid’s vocals are among my favourite of this type and his amazing voice on the chorus of “Nerve” shows why.  On the flipside, the vicious “Bastard Chain” shows he hasn’t forgotten how to roar, either.  A video camera was on stage the whole time so perhaps a DVD is in the near future for the band or maybe they were just recording Wichers’ last show for posterity sake??   Either way, with Wichers being the chief songwriter in Soilwork, it will be interesting to see where they go with the next record.

You’d never know that this was Strapping Young Lad’s third show in Vancouver in less than seven months because the local boys received the heartiest welcome of the night.  Devin Townsend came out in his usual manic glory, tossing insults at anyone and everyone (to a guy who tossed a bottle of water at him: “You missed, you stupid inbred fuck!”) in his path while adding just the right amount of genuine love (“Make sure to buy two t-shirts…get one for your lovely girlfriend”).  Townsend’s well-noted quote that “there are about five chicks at this sausage party” pretty much summed up the evening’s attendance but those who were there were treated to the usual slaying of innocence and eardrums at the hands of Vancouver’s most well-known underground metal band.  ALIEN, an album that continues to grow on me more and more with each listen, was showcased with four tracks including the back-to-back crushers, “Imperial” and “Skeksis.”  “Love?”, featuring guitarist Jed Simon on backing vocals, has my vote for song of the year with the perfect blend of clean and shrieked vocals and a stunning drum performance from Hoglan.  A punishing version of “Relentless” was highlighted by Soilwork’s sound guy, Matthias, storming on stage dressed in nothing but a wrestling mask and a strategically-placed sock, pulling Townsend to the ground and proceeding to get turned over and dry humped.  The over-the-top persona that the band takes on stage with them doesn’t stop with Townsend, either.  After repeating the obligatory “Welcome to A&W.  My name is Devin.  Can I take your stinking order?” prior to “In The Rainy Season,” Simon and bassist Byron Stroud threw out perfectly synchronized horns to the crowd and Hoglan’s raised middle fingers prior to “All Hail The New Flesh” solidified the band’s tongue-in-cheek “you suck, we rule” motto.  Former SYL keyboardist Munash Sami (now playing drums in Hank III’s band, Assjack) was in the crowd taking in the show and like the rest of us, he was either smiling or headbanging along to what was happening on stage.  Strapping Young Lad simply destroys live and this show was no exception.  The band is always on and kicks ass night after night, year after year.

The last few times I have seen Fear Factory live, Burton C. Bell’s voice has been hit-and-miss.  His mid-range is always excellent and for the most part, the growls are free of any issues either, but his clean vocals have been a bit shakey, especially at the upper end.  Fortunately, Bell was “on” for most of this night although the soaring choruses of “Archetype” and “Linchpin” gave him some problems that he later poked fun at by doing an exaggerated Michael Jackson impression (“Eee hee!!”).  Vancouver has become somewhat of a second home to Fear Factory over the years with parts of 1998’s OBSOLETE being recorded here and the mastering of 2004’s ARCHETYPE, as well.  Then there’s the fact that Byron Stroud pulls double-duty between Strapping Young Lad and Fear Factory!  With this tour being touted as “15 Years of Fear” by the band, the 80-minute set was broken into segments by respective album.  This was an interesting idea however it would have been more effective if they had also gone chronologically beginning with 1992’s SOUL OF A NEW MACHINE and moving to this year’s TRANSGRESSION release.  Interestingly, the fact that only two songs were played from TRANSGRESSION pretty much summed up the general feeling of that release’s failure to stand up to the rest of the band’s catalogue.  Also, the fact that there was no encore—the band seemed to almost run off the stage—and two songs (“Scumgrief” and “Timelessness”) were dropped from the set seemed like a particularly odd way to end what all four bands raved about as being “the best tour we have ever been on.”  On the positive side, “Descent” was played for the first time since 2001 and the band unleashed a menacing version of “Martyr.”  Raymond Herrera’s drum skills are always awe-inspiring and on tracks like “Demanufacture,” “Shock” and “Replica,” it is clear as to why, even in the live setting.  Guitarist Christian Olde Wolbers seems to be coming into his own, as well, leaving Dino Cazares as a memory of days gone by.  Wolbers’ move from bass to guitar appeared seamless on record but his confidence is definitely starting to show on stage, too.

Overall, this was an excellent show and fans seemed to have a phenomenal time.  Perhaps it is the jaded music writer in me that has seen too many shows and repeated performances but this one just seemed like old hat to me.  Solid performances all-around but, with the exception of Darkane and Wichers’ swan song with Soilwork, there was nothing that really struck me as special or worthy of raving about, either. 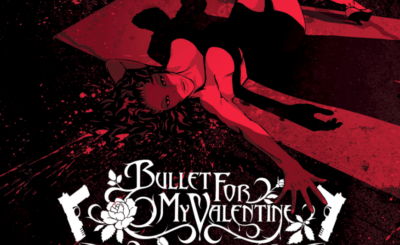 Bullet for My Valentine live at Club Nosturi, HELSINKI