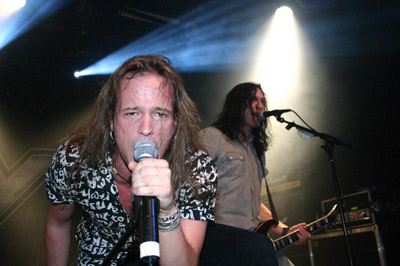 With a bill that was sure to make power metal mavens drool like Pavlov?s dog, the European invasion of Vancouver began as Hammerfall and Edguy (along with Canadian prog/death five-piece Into Eternity) stormed through The Commodore Ballroom, leaving the thin crowd of roughly 300 breathless and awestruck.  Not only do the power metal tours usually bypass Vancouver (and Canada as whole, for that matter) but this was the first time Hammerfall had set foot on Canadian land while Edguy had only played once before in Montreal and Quebec City.  Power metal is hardly atop my list of preferred metal genres however both bands do rank among my favourites.  Seeing Into Eternity for the third time in four months was a treat as well, so this three-pack was sure to be entertaining?

Before Regina?s Into Eternity saddled up, I chatted with Dave, their merch guy, who told me bassist Troy Bleich had been rolled for $250 three nights earlier during their stop in Minneapolis.  Without looking any worse for wear, Bleich and the rest of the band delivered yet another solid half hour set, showcasing six tracks from 2002?s DEAD OR DREAMING and last year?s brilliant BURIED IN OBLIVION release.  Hometown boy, vocalist Stu Block, must have been in heaven on stage at The Commodore, which allowed him great freedom for his mugging and over-the-top rock star shtick than the band?s previous two stops here (read reviews here and here).  Block even gave one of the bald-headed security guards? craniums a spit shine.  Block?s voice is among the most powerful in metal, yet his recent addition to the band still has many wondering who this oddball character is.  We locals already know, but one listen to Block?s screams on ?3 Dimensional Aperture? and his ultra-high falsetto conclusion to ?Beginning of The End? must be heard to be believed.  As always, The Commodore produces excellent sound and the Tim Roth/Rob Doherty guitar tandem sizzled.  Solos were nailed spot on and the speedy technical riffs came fast and furious.  Roth delivered a blazing solo on ?Beginning of The End? (dedicated to Victor Langen from Kick Axe) and mentioned the death of both his mother and Doherty?s father during the recording of BURIED IN OBLIVION before ?3 Dimensional Aperture.?  ?Elysium Dream? and ?Shallow? from DEAD OR DREAMING are excellent additions to the band?s set but I?m still left wondering why their self-tilted debut has been all but forgotten about in the live setting?!  With the Stratovarius and Opeth tours coming up, this is not the last we have seen of Into Eternity and I say, one can NEVER have enough of them!  The fourth release?and first with Block on vocals?is sure to take the band to the next level in 2006.

The curtain led many to believe that something special would be behind it, but once it was lowered (to HELLFIRE CLUB?s intro ?Ladies and Gentlemen, welcome to the freak show!?), all that was revealed was a cloth backdrop of Edguy?s logo.  Despite that letdown, Edguy turned up the pomp and swagger and delivered an enjoyable 60-minute set full of cheesy posturing, clich?d rock star tricks and downright silly stage banter (?Land of The Miracle? was introduced by vocalist Tobias Sammett as ?one of our pussy, candy ass ballads?).  Behind all that, though, was an excellent selection of tracks that featured glaring omissions from over half the band?s career.  For obvious reasons, the set drew heavily from last year?s HELLFIRE CLUB, yet 1997?s KINGDOM OF MADNESS, 2000?s THE SAVAGE POETRY and 2001?s MANDRAKE were completely forsaken (?Tears of The Mandrake? was on the printed setlist but was replaced with ?Mysteria? at a fan?s request).  Despite a couple of dead-in-the-water lines (Sammett repeatedly referred to Vancouver as ?Fuckouver? in a lame sexual reference before ?Lavatory Love Machine?) and tired stage moves (?Which side of the crowd is louder?  Let?s hear it!?), Sammett is the ultimate frontman and his charisma and enthusiasm worked the crowd to the max.  His vocals were flawless and his energy was endless lending that all-important angle to the live show.  The band even launched into a few bars of Iron Maiden?s ?The Trooper,? with Sammett nailing Bruce Dickinson?s vocals perfectly.  Felix Bohnke?s eight-minute drum solo (featuring ?The Imperial March? from STAR WARS) was a complete waste of time and in a one hour set, also unnecessary.  Tobias Exxel?s endless mugging and obvious camaraderie with guitarist Dirk Sauer was also nice to see on stage.  A band having fun equals the crowd having fun?plain and simple.  The HELLFIRE CLUB selections were wisely chosen and ?Navigator,? ?Lavatory Love Machine,? ?Under The Moon? and ?Mysteria? were definite highlights.  The blazing encore of ?King of Fools? came complete with crunching riffs and its anthemic melody left fans chanting ?Edguy, Edguy? for a few minutes after the band had left the stage.  The still-small, but very enthusiastic and appreciative crowd wanted more but, alas, Hammerfall was up next and it was past 11:00PM already.

The ridiculously long set changeover saw Hammerfall take the stage at 11:45 and sadly, the band left the dragon and other stage props back in Europe.  Much like Edguy, this setup was stripped down and basic featuring only a cloth backdrop with the Hammerfall logo on it.  With approximately 350 people on hand by this point, the venue was still embarrassingly less than half full but the crowd was there to show the bands that power metal passion lies beyond European shores.  What was indeed a welcome change was that the fans were not moshing and with the exception of some neck stiffness from excessive headbanging or a sore shoulder from playing guitar, no one left hurt!   People came to have a good time and enjoy the music, which, in itself, left me happy.  Unlike Edguy, Hammerfall allowed its entire catalogue to be represented in the setlist with at least two songs from each CD.  The opening guitar arpeggios of ?Secrets? echoed through the venue as the curtain raised and the band emerged from the darkness.  Oskar Dronjak, a tall, wiry man with long black hair and the worst moustache in music, led the attack early on, splitting solos with Stefan Elmgren and creating a landscape of riffs and melodies that were spot on with their recorded material.  The real show, though, lied with bassist Magnus Rosen, who seemed to be channelling the spirit of KISS? Gene Simmons in both appearance and dress.  Rosen?s legs and boots clanked with sheet metal cut-outs and his lizard-like body movements and kabuki-styled hair had me thinking it was The Demon himself.  While there was no breathing of fire or spitting of blood, the silver sequined shirt with one long sleeve and one short sleeve was an added bonus.  As if Edguy?s drum solo was not enough, Anders Johansson saw fit to provide another that ground the energy to a halt.  For a band to forsake time for one, or even two, songs for a drum solo on their first visit to a country just makes no sense whatsoever, especially in a 60-75 minute set.  Vocalist Joacim Cans was in top form on such tracks as ?Riders of The Storm,? ?Hammerfall? (dedicated to ?true fans of heavy metal?) and ?Glory To The Brave,? which he led the crowd in a massive sing-along.  For the latter, Elmgren and the band dove into the first few bars of Metallica?s ?Enter Sandman? before Cans regained control.  ?Blood Bound? and ?Hearts On Fire? are two of the band?s most anthemic songs and Hammerfall was firing on all cylinders with them live.  The driving groove of these tracks is addicting and the melodies just as infectious.  The crowd was singing along and having a great time much to the delight of the band members.  Who says Vancouver isn?t a power metal city?!?!?

The thin crowd was inversely proportionate to the energy and enthusiasm Vancouver displayed for Hammerfall, Edguy and Into Eternity.  Despite the lacklustre numbers, this was one of the most passionate crowds I have seen in recent memory and the bands gave it their all regardless.  If I had to choose which band dominated between Hammerfall and Edguy, I would have to crown Edguy as the victors.  Sure, Hammerfall had a more varied set, but Edguy is just so damn much fun to watch, they could have played the same song over and over again and the crowd still would have had a bang-up time!  All in all, I hope that enough people showed up and left an indelible mark on the band and promoters to warrant a return visit.  This has been an exceptionally busy concert season in Vancouver, which may be self-damaging due to the hit on metalheads? wallets, but when taken into account where our city was (or rather NOT was) on the heavy metal map even two years ago, it?s not a bad position to be in!

**Thanks to Jamie at House of Blues Canada for the press pass and to Loana at Nuclear Blast Records and Heather at Century Media Records for photo approval.