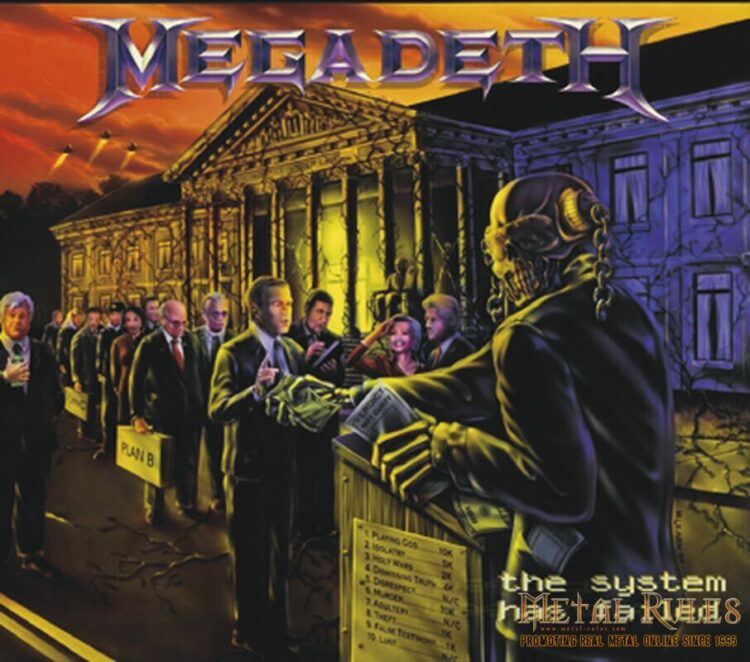 In 2004, just as the sparkle of hope glowed dim, Dave Mustaine struck back with the excellent new album ‘The System Has Failed,’ which especially after the less than stellar ‘The World Needs A Hero’ release, was a most welcome return to the high standard of songwriting that we’ve come to expect from Dave. After the album release, Mustaine surprisingly announced that the forthcoming tour will definitely be their last ever. Now they are in the midst of their farewell tour called “Blackmail The Universe,” and we were lucky to witness the band’s brilliant performance in Stockholm.

Opening for Megadeth on this tour is the legendary NWOBHM band Diamond Head, now with their new singer Nick Tart. Their set of approx. Three-quarters of an hour comprised not surprisingly of their best-known songs bundled with a couple of new ones. The audience gave the band an enthusiastic reception and numbers like ‘Am I Evil?’ really seemed to hit the mark even with the crowd’s younger members. After about half an hour of intermission, it was time for the evening’s headline act Megadeth to hit the stage. “Blackmail the Universe,” the opening track of the new album, kicked off the show. As the first notes poured through the PA, one promptly discerned the rather substandard sound quality in the venue, an impairment which, as it turns out, somewhat mysteriously got fixed a few songs into the show.

The stage was dominated by the eminent drum riser, with little else to catch the audience’s interest. The banner on the stage wall was hardly visible throughout the show at all. The lighting, in all its simplicity, worked elegantly to the show’s advantage. It should come as no surprise that the proceedings’ undisputed star was without question Mr. Mustaine, whose presumed throat ailment seemed not to be distinguishably affecting his performance. Rather than just staying in front of the microphone stand, he took every opportunity to stride around the stage to the audience’s great delight. Still, the man possesses such an awesome onstage presence that all he really needed to do to have the audience in the palm of his hand was to utter a word or two between the songs. Instead of just a few words, he, in fact, addressed the audience several times in quite an uplifting manner. Evident from his playing was also that his arm was back to full capacity, and there were no sights of any problems. Dave remembered to mention that just two years earlier doctor said that he would never play guitar again. He also briefly talked about the loss of his good friend Diamond Darrel and then dedicated “Back in the Day” to his memory.

As for the new backing band that Dave has gathered for himself, James MacDonough (bass), Glen Drover (guitar), and Shawn Drover (drums), it’s not such a clear-cut case. Obviously, with a band like Megadeth, there will always come the ballast of history, over twenty years of it. Thus, it will always be an ordeal to have a new member, never mind three new members in a band of such a legendary status. These things considered, the current line-up deserves kudos for a valiant effort, as it’s hard to try and not get overshadowed by what has come before. As time goes by, things will no doubt get even better. Whoever planned the setlist should be congratulated for a job well done; with such a gargantuan quantity of good songs to choose from, it must have been difficult. For some reason, there weren’t any songs played from the “Risk” or “A World Needs a Hero” albums, but with over half of the new album represented, the whole set clocked in at almost 2 hours. One of the definite highlights and a delightful surprise was the inclusion of the superb ‘She-Wolf.’ Of the new songs, extra mention must go to the brilliant ‘Of Mice and Men,’ and it must also be said that it’s always cool when someone plays?s “Paranoid” as Megadeth now did? 😉 After the current European tour, which will end on the 26th of February in Granada, Spain, Megadeth will, after a short Japanese tour, return to the European continent to play some festivals in the summer. See you there!

21. Holy Wars… The Punishment Due

Through unforeseen circumstances, the opportunity for us to attend this concert arose rather unexpectedly. Thus we acknowledge with great gratitude the help rendered to us by the Megadeth crew, particularly Glen Drover’s guitar tech Willie Gee, tour manager Suzy Nilsson, Dave Mustaine’s personal assistant John Leeder and of course Dave Mustaine himself.

More pictures from the Stockholm show !!!