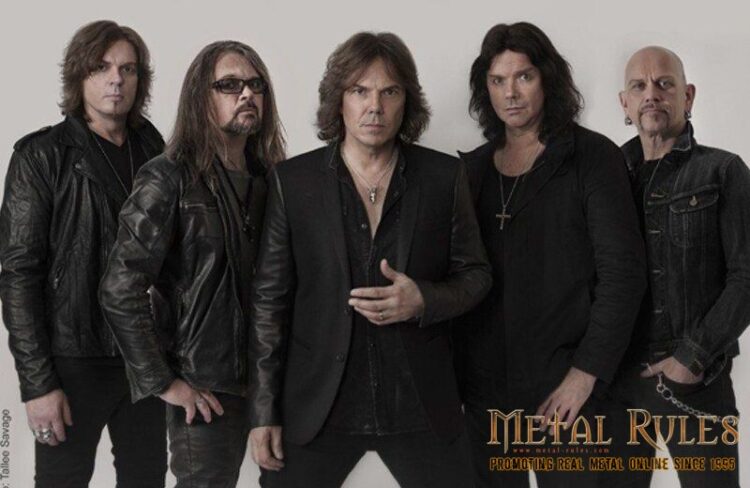 Review and pictures by Marko Syrjälä

It’s been 11 years since Europe last played in Finland. It was the same venue (House of Culture), but the crowd’s size was hardly more than 250 people. That happened in the early nineties when grunge ruled the music markets and most hard rock bands slowly but surely disappeared, and so did Europe. Tonight shows that things are getting better and hard rock is doing fine again. Record sales have picked up, and what’s most important, people are coming to see the shows again.

Europe is back, and now they are here to bring some true 80?s feeling back to the hard rock genre. They just released a brilliant comeback album called “Start from the Dark,” which is powerful evidence that this band still has something to say in today’s music scene. About 1000 people showed up for tonight’s concert, which was the opening night of their latest tour, a tour which will go on across Europe before they hit Japan early next year. As audience screams continued to fill the house, the band took to the stage. The lights faded away, and Boom!! The show kicked off with the new album-opening track “Got To Have Faith.” It’s was a surprisingly heavy cut that showed what the band presents today. People in the crowd seemed to be quite confused in the beginning. Maybe it was because of the new,  low-key sound or just because they didn’t recognize new tracks too well? Another newbie called “America” came next, and people were even more surprised. Could this be the same band famous only because they did “Final Countdown” in the golden ’80s and looked even cuter than some girls? Instead of those “beautiful boys.” Instead of that, we now have five quite serious-looking men dressed in black, playing a kind of music which could easily be called metal!

Fortunately, the next song saved the day for most of the crowd. It was “Superstitious” from the last successful album in the 80?s OUT OF THIS WORLD, and people started to wake from their slumber. Another crowd favorite, “Ready Or Not,” followed before the band hit briefly back to old stuff with “Wings Of Tomorrow.” Suddenly the atmosphere changed from curious waiting to a real concert feel.

Vocalist Joey Tempest was constantly running across the stage doing jumps and swinging his head like any hard rock band’s frontman, while both John’s were mostly standing on their side and just played their hearts out. One of the band’s biggest hits in the eighties was a ballad “Carrie” from their breakthrough album FINAL COUNTDOWN. This time Joey played it as a solo. It was just him and the acoustic guitar. That worked well, and the chorus was mostly sung by the audience and was loud.  That was one of the highlights of the show. Another highlight was “Flames,” which in my opinion is the best track from START FROM THE DARK. A drum solo by Ian Haugland was entertaining and funny. He was playing drums above guitar riff loops that came out of the PA. The first riff was “You Got Me” by Van Halen, and then came the opening riff of legendary “Ace Of Spades,” and everybody was having real fun, even Ian himself. What a nice idea!

“Cherokee” and “Rock the Night” closed the main set. The atmosphere was brilliant, and now it was time to wait for THAT song. After a short break band returned (as bands usually do) and did two more new songs, including a title track of the new album, before the legendary keyboard riff started to hum from the speakers and “The Final Countdown” was finally played. And everybody seemed to have fun then.

Even though singer Joey Tempest was the main target for the female fans, I need to say that John Norum’s guitar playing was brilliant. Norum is one of the most underrated players of our time, and he should be respected a lot more. Originally he left from Europe right after the FINAL COUNTDOWN, and since then, he has released a bunch of solo albums, and he also worked with Dokken and did two albums with them. In my opinion, the new album’s guitar sound is quite similar to Dokken’s “Long Way Home” Bassist John Leven and keyboardist Mic Michael stayed a bit more in the background, but both did their job very professionally. Leven also sang a lot of backing vocals. Both of them plus Ian have played mostly together in various bands since the band split, and perhaps because of that reason, they are now playing together strongly and sounded very tight.

The audience seemed to be completely happy with the gig. And so was I. The sound was really loud throughout the set, but at the same time, it was very clear and easy to listen to. There were no big show elements, like massive pyro, used. The band let the music speak for itself. The setlist included a lot of classic Europe songs mixed with several new songs. Of course, the men have gotten a little older, but at the same time, the guy’s hair and look have been updated for this century. The band sounded and looked still damn good, and it’s hard to believe that the first Europe album was released in 1983.

Only time will tell how successful this reunion will be, but so far, everything looks good.